Named after the saint known for taking the gospel to Ireland, St. Patrick’s Dallas is built on the belief that the call to make disciples is not the responsibility of just one person, but the joy of the whole church. Just as St. Patrick’s ministry in the fifth century involved a team of clergy, lay people and students, this new gathering of believers, launched last month, seeks to bring redemption in Northwest Dallas through a church community filled with grace and hope.

After ministering in numerous other denominations, Mark+ Walz, pastor of St. Patrick’s Dallas, discovered a balanced approach that incorporated Scripture, Sacrament and Spirit in harmony. “The three-stream Anglican style and philosophy of church and worship was something that I found was missing in a lot of other experiences I had in church ministry,” he shares.

He was drawn to three-stream Anglicanism in part because of the way it facilitates the participation of the entire church body in ministry. “The three-stream Anglican philosophy really opens up more involvement from laypeople,” he explains, sharing how it provides more opportunities for those with a wide range of spiritual gifts, from hospitality and encouragement to healing and prophecy.

After “coming home” to this tradition, Mark+ was drawn to the idea of planting another three-stream church in the Dallas area because he saw that few churches incorporated Scripture, Sacrament and Spirit equally and openly. “I think people are missing that,” he says, adding that while many aren’t new to the Christian faith, “they haven’t experienced what it looks like to be in a robust, full church expressing itself in those three streams.”

Following his ordination into the Anglican Mission in America (AMiA), Mark+ spent nine months in Anglican Associates, a church-planting cohort. He was then immersed in the ministry of All Saints Dallas to better understand how to minister in a three-stream church and be prepared to be part of All Saints’ church-planting efforts.

Mark+ shares that church planting within the AMiA is unique because the Mission is primarily focused on the local church. “We’re trying to start new works and reach the lost, reach the unchurched.” And he sees how the AMiA’s relatively small size offers advantages to church planters: “We’re lightweight; we can be fast; I feel like we can respond when we see God moving and join—be a part of it.” At the same time, he appreciates that the Mission is nationwide, with clergy coming from a wide range of backgrounds. 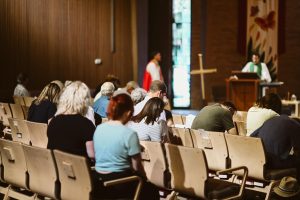 But why plant another church in the Dallas area when two other AMiA churches already existed there? Mark+ explains that while the city may be full of church buildings, it’s lacking church communities. And he didn’t see other churches that offered the unique three-stream approach he’d come to embrace. All Saints Dallas, the “mothership” as Mark+ calls it, has experienced rapid growth since its establishment in 2010, and its leadership has recognized the value of establishing additional congregations in the locations in which they saw God at work rather than trying to grow into a church that serves the entire region.

St. Bartholomew’s, the first church to be planted out of All Saints, was established in 2018 as leaders recognized God moving in East Dallas. St. Patrick’s follows in its footsteps, seeking to be part of what the Lord is doing in the Northwest section of the city. A small launch team was formed in 2019 to plan for this new congregation.

This team recognized that the first step was to simply begin gathering people. Mark+ recalls how he and his wife, Cate, would often go to the neighborhood park or join neighborhood activities, telling people, “Hey, we’re planting a church!”

Though getting the word out amid a pandemic proved challenging, the more people they talked to, the more they discovered individuals and families who no longer attended church or who were interested in church but hadn’t given it a try. Informal meetings in the Walzes’ backyard began in the summer of 2020 because, as Mark shares, “people were desperate to gather and to take communion and hear God’s Word.” Formal backyard gatherings started in March 2021, and the church officially launched on September 12, 2021.

“[Church planting involves] allowing people to meet one another and get to know another, and then slowly but surely casting a little bit of vision,” Mark+ explains. “Some people were excited, and some people jumped on board.”

Those who became part of St. Patrick’s come from a range of backgrounds, including a number of “recently churched” individuals as well as families who’d been absent from church for years and some who came from All Saints to help plant the new church. Mark+ explains that for those who’ve been away from church for a long time, it’s often easier to become part of a new congregation rather than join an established community. 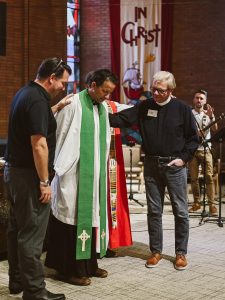 Homing in on the vision for the church has been an ongoing challenge. “We have to remain focused,” Mark+ emphasizes, sharing how it can be easy for churches—especially those that have been established for a long time—to lose sight of what they’re doing and where they’re headed.

Facing spiritual warfare has also been a struggle, particularly in the early stages of the church plant. When Mark+ and Cate sensed they were dealing with this sort of opposition, they reached out for prayer, protection and healing from those in the All Saints, St. Bart’s and St. Patrick’s communities. But, as he reflects on this time, Mark+ sees that experiencing these attacks was a sign they were on the right track and a source of encouragement. “You realize you’re on the right path, that you must be doing something right that you’ve angered your enemy.”

To others who are in the early stages of church planting, Mark+ emphasizes that the personal prayer life and holiness of the leader is of utmost importance. “If I was not praying on a regular basis, I think I would have quit a number of times. It’s difficult work.”

He also advises, “Just begin with gathering,” and offers a reminder that not everyone is going to fit with the mission of a particular church plant at a particular time. Mark+ encourages other planters to be willing to let people go and to accept that different people are called to different things at different stages of a plant. And he says, in every stage, ongoing mentorship or coaching is critical as it’s a source of vital support and provides a setting where planters can share their struggles openly.

This friendship and community aren’t only vital for church planters; they’re key elements in planting a church, and Mark+ has been blessed to see them develop at St. Patrick’s. “Right now, my greatest joy is seeing people having fun—when kids are laughing or running around or people are enjoying things like communion or conversation.” He shares how half of his congregation showed up for a recent happy hour, and seeing so many people come together to enjoy time as a church community delighted him. “There’s so much happening in the world right now that is not joyful. … So just seeing people having fun is a big deal.”

As he takes joy in these signs of a growing, vibrant community and seeks to see people experience the beauty and balance of the three-streams, Mark+ is quick to acknowledge his dependence on God. “We rely upon the Lord,” he declares. “We know that no matter what comes, it’s his work.” 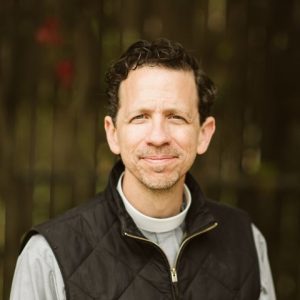 Mark+ Walz began ministry at All Saints Dallas in 2017, serving as Church Planter in Residence until the September 2021 launch of St. Patrick’s Dallas, where now serves as pastor. Mark+ worked in a number of churches and denominations before finding a home within the Anglican tradition. As a pastor for over 20 years, he has ministered to students and young adults, and as an associate pastor in Ohio. He is passionate about preaching, making disciples and finding ways to talk about sports and movies.