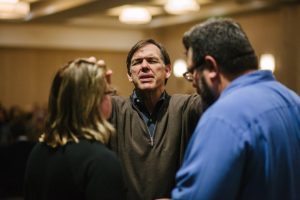 They only met once a month and only for seven months. They started as an in-person gathering, but with the onset of COVID-19 they moved to Zoom. The group numbered about 60, with a third from All Saints Dallas (ASD)—including AMiA Lead Bishop, +Philip Jones, with his wife, Claudia. Participants were invited by other participants, but as word spread people were signing up on their own.

Between meetings they read assigned Scriptures and books. But mostly they practiced what they were learning: understanding their identity as children of God, embracing the spiritual authority they have in Christ and experimenting with new prayer tools.

The training is called “Spiritual Authority Cohorts,” and is presented by an independent mission group, Novo. Though only seven sessions, it is profoundly transformative. “We loved it,” said one ASD participant. “It was so exciting to find wings to our prayers.”

“It brought to me a greater awareness of situations where I can bring these prayer tools to bare. I used to go to work with little thought of spiritual things. But now I pray over the workspace regularly,” explained another participant.

A mature believer who has attended cohorts multiple times reported, “It solidified in whom my identity is found and pushed me further in understanding the authority I have in Christ over the enemy.”

As +Philip Jones says, “It is so important that all believers understand these basic principles of prayer and spiritual authority. No matter how long or short of a time we have walked with Christ, these foundational truths need to be re-appropriated and reapplied often.”

To learn more about the cohorts or how to start one in your area visit novo.org/sacohort.