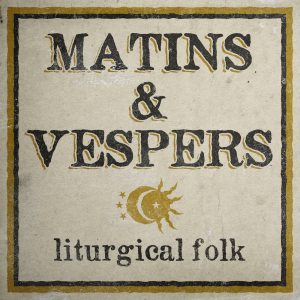 By Ryan and Melissa Flanagan, with Liturgical Folk.

MATINS & VESPERS is a collection of eight new musical settings for Morning and Evening Prayer, liturgically known as Matins and Vespers. At the beginning of the pandemic, when everyone was isolated to their homes and unable to worship, pray, and fellowship in person, we (the Flanigan Five) sought refuge in the Book of Common Prayer. Most mornings and evenings, gathering around the table for breakfast and dinner, we’d open our prayer books, confess our sins, pray the Psalms, hear the Scriptures and offer intercessions and thanksgivings—and it was never easy.

Our saving grace many mornings and evenings was the beautiful piano that had recently been gifted to us. Music makes the prayers more accessible to us, and much of the Daily Office is actually meant to be sung. So, since there is none in the prayer book, we made up our own music.

It started with our son Liam, 11 years old at the time, who composed a setting to the Confession of Sin (with a little help from his dad). Both Matins and Vespers begin with confession. Liam plays the piano on the recording, and we thought it fitting to title the song “Liam the Confessor.”

After confession we turn to the Psalter. We prepare to pray the Psalms by singing the Venite, the Jubilate or the Pascha nostrum. Having already set the Jubilate (Psalm 100) for our PSALM SETTINGS album, I thought it would be fun to set the other two texts, playing off of some of the melodic themes in Psalm 100. The three songs together form a three-movement piece, but only the Venite and Pascha nostrum appear on the new album. We call them “Caverns” and “Keep the Feast.”

The services of Morning and Evening Prayer also include several Canticles, which can be said or sung between Scripture readings. You will hear a couple of these Canticles on our first album TABLE SETTINGS, including “A Song of Praise” (“Song of the Three Young Men”) and “Glory to God” (“Gloria”). The Canticles we included on MATINS & VESPERS are “Song of Moses (Cantemus Domino)” and “Song of Mary (Magnificat).”

The shortest and perhaps most beloved and useful song to our family is “Prayers of the People (Intercessions and Thanksgivings).” We recorded it in somewhat of a Taize style, featuring each member of our family, but the way we sing it during Morning and Evening Prayer is as a simple call and response to conclude each person’s prayer of intercession or thanksgiving.

The Phos hilaron (O Gracious Light) is the ultimate Vespers prayer, so we had to include a new setting of it, and “Keep Watch” was adopted by our kids, especially our youngest Noelle, as the family lullaby. Noelle sings it on the album.

We pray that these songs are a blessing to you, your family and your community. They are intended to be useful to you as well, so we are releasing a songbook along with the record. We are also releasing videos of four of the songs, especially the ones that feature our kids. The “Song of Mary” includes a dance choreographed and performed by Lily. Unlike our previous albums, MATINS & VESPERS heavily features our kids, three-part harmonies and all. It was recorded at First Presbyterian Church of Dallas on a piano, organ and acoustic guitar.

Ryan Flanigan was born and raised in Chicagoland and has been leading church music since 1997. He grew up in a musical family and a church that valued music greatly. Ryan moved to Dallas in 2000 to attend Christ for the Nations Institute. He graduated from CFNI in 2002 and went on to earn a bachelor’s degree at Dallas Baptist University in 2004. He moved back to Chicagoland to attend Trinity Evangelical Divinity School (TEDS) from 2004 to 2007. He earned a master’s degree at TEDS and spent the next seven years in full-time worship arts ministry at River Valley Church in Mishawaka, Indiana. He served as worship leader at All Saints Dallas for over six years. He leads the music group Liturgical Folk and writes much of their music. Ryan is married to Melissa, and they have three children.