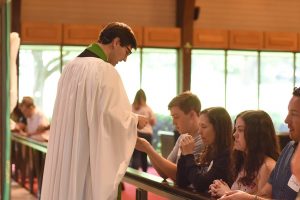 [Read Part 1 ] On July 1, 2018 All Saints Dallas East became St. Bartholomew’s. We followed up with Jay+ Wright, rector of this newly independent church, to hear how God has been working at St. Bartholomew’s as they take this significant step, and what Jay+ sees in the years to come.

Congratulations! What was that first Sunday of worship like as an independent church?

Church was really celebratory. It had a really great energy about it. It was a nice start to the new season.

I think the most exciting things don’t seem like that big of a deal, but point to a lot of work that went on in the background: signs, a bulletin, a website. More than that, they point to the formation of us as a people.

How and why did you choose the name “St. Bartholomew’s”?

About 10 years ago, at Grace Anglican in Fleming Island, Florida where I used to serve, we had what we called Saint’s Day: Every Wednesday at 10 a.m. we would have a little worship service during which we would pull in and celebrate whatever saint whose day was the closest. Saint Bartholomew’s day is August 24. On that day in 2009 I first learned about Bartholomew and a few things struck me about him. First was the prayer for his saint’s day, which addresses God and says, “Grant your church to love what [St. Bartholomew] believed and preach what he taught.”

That prayer left such an impression on me because it was so simple and it involved the head, the heart and the hands—just asking God to allow his Church, both local and catholic, to love what that disciple, an apostle of Jesus, believed. The content of his belief was a person: Jesus—the Word of God and everything that Jesus taught and preached. When the Church preaches what he taught it’s so natural.

I’ve always thought, “If I ever have a chance to name a church, ‘Bartholomew’ might be a good name.”

There were pragmatic reasons too. I like how different it is. In Dallas there are a lot of churches, including many that have a saint’s name in them. The closest Bartholomew’s is in Fort Worth, about an hour’s drive away.

When Bishop Jones said the church needed to change its name, I made a list of possibilities and St. Bartholomew’s was one of them. But, I knew it was different and I wasn’t sure. I prayed a lot.

Then, my wife and I were in Israel, at the wedding church in Cana, the place where Jesus turned water into wine. She nudged me said “Look.” Above us was this giant icon of Bartholomew of Cana.

The last time we talked you mentioned that it was exciting for you to watch people take ownership of the church. How have you seen members of the church get involved?

The people who built the website did it as volunteers. Our new logo and the whole design were done by a parishioner. I’ve watched our leadership team become a governing body. I’ve watched people take ownership financially in a way they hadn’t before, knowing that we’re still growing and have a long, bright future ahead of us—that’s been wonderful to see.

We’ve added to the core team—the group that planted the church—as people have come in and adopted the behaviors of that team: contributing regularly, serving on a team, doing their best to worship on a regular basis and working for the growth of the church.

On July 8 we had a celebration for the core team and I was just underwater with all sorts of responsibilities. I tapped a few people and asked, “Can you make this happen?” Ami, my assistant, worked with several volunteers and we had this awesome party. I loved it because I was just able to show up, whereas three years ago it had to begin and end with me.

Has anything felt significantly different since you’ve become an independent church?

The spiritual stakes are raised. I just had lunch with an old mentor and one of the last things we talked about was creating an intercessor network. Allen Hughes (AMiA’s Counselor General for Leadership Advancement and Mission Stewardship) has us do that as we begin our church-planting efforts, and I think I need to re-engage in that and get eight to 10 people who will commit to pray for me, especially at certain times.

I’ve noticed vulnerability. Being an independent church differentiates us in the Kingdom. We still have the same bishops, we’re still with AMiA; but it’s like when a man leaves his family to take a wife: There’s a new unit of the Kingdom.

My job is different too. All Saints Dallas generously provided back office services for us while we were still connected to that church, which was really helpful. Now we’re starting back at ground zero. I have to handle more administrative things, but I like that—I like being able to see the rhythm, what it takes to run the organization. Then, as we grow, we can continue to responsibly attend to those things with additional staff.

What do you see as your biggest challenges in moving ahead and how are you trusting God to work in and through those challenges?

In our rented facility at Central Lutheran, we have not only a really beautiful space to pray in, but a place from which to launch our mission. But eventually we’d like to have a permanent place from which to base our ministry. This invites us to pray and imagine and dream.

In our monthly Summer Worship Nights, we’re focusing on the phrase “be ready.” Each night we’re looking at a different facet of being ready to fully launch in the fall. We talked about being present to God, to self and to others in June. In July, Chris+ Myers, our associate rector, will teach on expecting God to move in the midst of this challenge, in the midst of this hope. I’m fully confident he will, because that’s God’s pattern with the people of Israel and with the church; that’s been his pattern in my life. 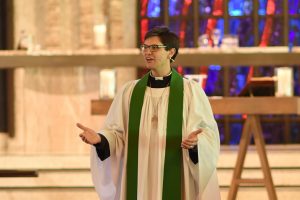 Where would you like the church to be in three or five years?

We’d like to be worshiping on a Sunday morning in a building of our own. I’d love to see our staff grow. I hope by then we’ve sent out church planters. I would like to see a more fully formed church in terms of our outreach. Right now, our outreach includes Sunday worship, pastorates and various events, but I would love to begin Alpha or something like it once we’re at a level at which we can sustain it.

What are your biggest prayer requests for St. Bartholomew’s?

A building—I pray for that every day. Faithfulness in committing to the work of ministry, that we’d be faithful with the people who are here and continue to be faithful as God continues to draw new people to himself here. As Craig Denison shared in his perspective on the naming of our church, “Bartholomew” is a patronymic: he’s the son of Tholome. Bartholomew was the son of a farmer, and ministry is often like farming: It’s long; it’s slow; it’s seasonal; it’s dirty and it’s often disappointing. My big prayer is that people would continue to commit to that and grow in their own spiritual lives and transformation.

Another big prayer is that we would be faithful and get out of God’s way. Paul said, “I planted, Apollo watered and God gave the growth.” That would be really be a gift to me, to be somebody who was there, was out of the way so that God could give the growth.

I’m really, really thankful to God for all that he’s done through All Saints Dallas, and really excited to see what he will continue to do here at St. Bartholomew’s.

Jay+ was ordained a priest in the Anglican Mission in 2011 but has served in various ministries over the last 20 years including worship leader and associate pastor at All Saints Dallas from 2011-2015 and most recently rector of St. Bartholomew’s Anglican Church, a plant of All Saints Dallas in East Dallas. In 2021 he returned to All Saints Dallas as Associate Priest and is also currently pursuing a Master of Arts in Biblical Counseling from Dallas Theological Seminary. Jay holds a Bachelor of Music degree from West Texas A&M University and a Master and Doctorate of Worship Studies from the Webber Institute for Worship Studies. Jay and Amy have four children.