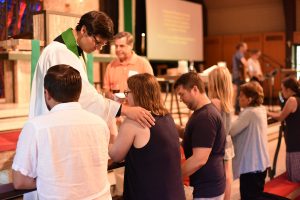 When Jay+ Wright began serving at All Saints Dallas (Texas) he had church planting in mind. Over the past few years, he and his wife, Amy, and a group of laypeople have been cultivating community in East Dallas, leading to the establishment of All Saints East Dallas.

In July this church plant will become an independent body, St. Bartholomew’s. Jay+ took time to share with us how God led him to serve in this church-planting role, what he’s learned and what he’d like other planters to know.

How did God bring you to All Saints Dallas?

We were serving at Grace Anglican in Fleming Island, Florida from 2008 to 2011, and really early in my time there I felt called to the priesthood. I was a worship pastor at the time and as I discerned that call, my wife and I realized we might be people who could plant a church. We’ve always liked pioneering new things, doing something more missional than just being part of a big established thing. That put Texas in our hearts and our minds because we’re from Texas.

We really felt drawn back, for personal reasons but also with a vision to plant an Anglican Mission in America (AMiA) church in Texas. The day before I was ordained as a priest, All Saints Dallas began weekly worship. I visited a few weeks later, and next thing you know, we’re moving to Dallas, a place we never thought we would live.

When you first stepped into your role at All Saints, did you do so with the idea that eventually you would be planting another church?

Yes. They needed a worship leader and I needed experience as a priest. We set up with the idea that in two, three or four years, as God provided, we would go plant something somewhere. 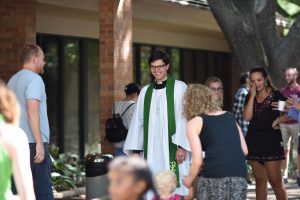 At what point did you start focusing more on the church plant as opposed to simply gaining experience?

About two years in God really clarified a vision for a plant in East Dallas. My family had moved to East Dallas pretty quickly after arriving in the area, and an affinity for the people in this place quickly developed. By May 2013 I felt fairly certain that God really, really wanted an AMiA church out here.

Were there specific things that caused you to feel that way?

As we reached out to friends and neighbors in Dallas, for us there seemed to be a cultural and emotional disconnect with where All Saints Dallas was at the time [in the western part of Dallas]. My gut feeling was that Central Expressway, which basically runs north and south through the middle of Dallas, is kind of an emotional boundary. Some of the people who live in East Dallas live here simply for economic reasons, but others choose to live here and there’s a sense of pride.

I knew I could build a case for a church plant, but I also had a sense of call from God. I was in London at a leadership conference and had a couple of visions about East Dallas, so that was really compelling.

One year, at Winter Conference in Houston, we had a speaker, Amy Orr-Ewing. Her talk really inspired me, “I’ve got to do something about this now, because no one’s going to do it for me. It’s time for me to stand on my own two feet and initiate.”

What were some of the first steps that you took? 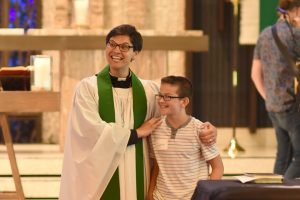 The first step was beginning the process of hiring my replacement, basically working myself out of a job. Second, my wife and I began to do outreach activities in our neighborhood. I started inviting dads over once a month for beers in the front yard. We’d build a fire in the fire pit and talk about leadership or just get to know each other. We did movie night in our yard with an outdoor screen; another time we had a back-to-school party and blessing for the kids. That final outreach event was meant to be the final step in this funnel of gathering these people and then trying to organize them into pastorates, midsize groups that would meet all over East Dallas.

Everything was going great until we tried to organize it into a group and it just fell flat. The lesson I drew from that was the culture of Dallas is such that people are still really familiar with church. Many places in the United States are very post-Christian, but Dallas is not quite there yet, so people are probably more accustomed to being invited to an existing, established rhythm of something happening. So, I realized, “I think we actually need a worship service.”

In the fall and winter of 2014/2015 we made a concerted effort to plant a church, with a worship time and pastorates, that would more or less be a ministry inside the governance and financial books of All Saints Dallas until we could stand on our own two feet and then spin off. That’s what’s happening on July 1. It’s time to stand on our own two feet.

What do you see as an advantage of planting a church as an offshoot of an existing church, rather than trying to start completely from scratch?

The financial backing has been a huge advantage. There wasn’t that pressure for me to get people to immediately buy in and take ownership without having time to build trust. I could go meet people, I could make community; but it just takes time. In today’s climate we have to win people’s trust and that does not happen overnight anymore.

It was also really helpful to have an existing system in which to operate. My sole job was to cultivate community with the 30 or so people who came from All Saints to help us plant.

That’s another benefit: we had people within the All Saints community who already had the vision, people who already had the DNA and had our trust, who heard a call from God and wanted to go plant with us. I hope that’s something that we can provide for a new planter in a group that we’ll send out in the next few years. That’s the life cycle of mission: Just like families beget children, churches ought to beget churches.

Were there specific resources or support you found particularly beneficial and would recommend to others trying to plant churches?

Counseling, coaching and community. I think counseling is really important. The counseling portion was really where I was able to process my own growth and challenges in light of planting.

Also, I would encourage planters to go find other planters. That’s your community. Those are your friends. Those are the guys you can go to and say, “Hey, what do I do about this?” And there has to be somebody on the ground with you who’s kingdom-minded and kingdom-oriented. If there’s not that group, then that’s an opportunity to create one.

We have a really tight-knit community of church planters in East Dallas. We have a once-a-month lunch, and I’ve really relied on those guys for prayer. It’s a refreshing outside resource. Not many of them are Anglicans, so it’s fun to hear their perspective because it’s different. To me that group has been tremendous and I’ve learned about a lot of cool resources.

I’m really excited by the tedious tasks, getting our documents filed with the state, setting up a bank account. Here’s the exciting thing: watching our people take ownership. They’re stepping up and seeing the need. They’re hearing the call from God, and watching God make all of this happen. I’ve learned over the last couple years I can’t make anybody do anything. You can invite people, you can instruct, you can teach, you can disciple; but at the end of the day you just have to trust God and trust people. That’s what’s so exciting.

AMiA is so devoted to planting Anglican communities that are guided by Scripture, sustained by the sacraments and enlivened by the Spirit; to me that’s the beauty of it. The other beauty of AMiA is the way that we are committed to our leaders with coaching—having Allen as a resource, being able to call up Bishop Matt Kessler, being able to go eat lunch with +Phillip, our Apostolic Vicar, any time I want. There’s an availability of people, the AMiA leadership. It’s the people that you have access to. It’s the relationships.

Does your church want to more about how to get ready to plant a new community of faith or how to identify new leaders within your group? The Anglican Mission in America would love to help! Please email us for more info at info@theamia.org.

Jay+ was ordained a priest in the Anglican Mission in 2011 but has served in various ministries over the last 20 years including worship leader and associate pastor at All Saints Dallas from 2011-2015 and most recently rector of St. Bartholomew’s Anglican Church, a plant of All Saints Dallas in East Dallas. In 2021 he returned to All Saints Dallas as Associate Priest and is also currently pursuing a Master of Arts in Biblical Counseling from Dallas Theological Seminary. Jay holds a Bachelor of Music degree from West Texas A&M University and a Master and Doctorate of Worship Studies from the Webber Institute for Worship Studies. Jay and Amy have four children.